Be Kind to your Hippocampus

How we learn, Learning | Carolyn 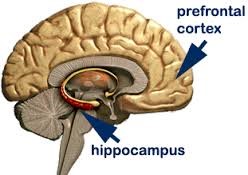 Let’s get into the technical stuff.  The prefrontal cortex – the part of your brain responsible for everything from cognition to decision-making – is flanked by both the hippocampus and the amygdala.  Both pay integral roles in learning, but they react very specifically in terms of modlette learning.

Information is only held within the working memory of the hippocampus for about 20 minutes.  If data is not converted to a long term memory by then, it’s usually discarded by the brain and no longer available for recall or future manipulation.

Unfortunately, traditional training can be both long and boring.  Not only does that tax the hippocampus’ ability to stay alert, but it practically begs learners to multitask while learning.  Scrolling through a phone or checking email while an instructor is talking means the hippocampus leaves gaps in the knowledge that will be stored in long-term memory.

Modlettes understand the hippocampus by breaking learning into smaller pieces the hippocampus is able to stay focussed while receiving information.  Short bursts of information are easy for the brain to receive, sort, and store, without losing focus or giving into temptation to multitask while learning.  The result is a condensed, effective version of training that can take half the time but have even more impact than traditional training methods.

The amygdala in its turn is responsible for processing emotion and creating the building blocks for sensory experiences.  When working in tandem with the hippocampus, emotional responses processed by the amygdala can actually strengthen neural pathways to improve recall and memory.  Think about this.  When we have an emotional response to some material, it’s next to unforgettable.  Our brain moves the information from working memory to long-term memory to recall later.  This is the key to real learning.

Modlettes, when well designed are short and punchy and create that emotional response that lights up the brain’s amygdala and tells the hippocampus to pay attention.  Using tools like humour or animation, short stories are created to cause a connection between the learner and the material.  What’s more, modlettes can create a positive reaction in learners, who are more than pleased to know that training doesn’t require hours of time investment.  A positive mood can also influence learning and information storage in the brain, further strengthening the link between short bursts of learning and better overall retention.