Why You Need a Storyboard 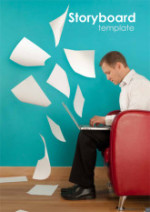 In speaking with modlette authors who are unhappy about their attempts at creating a modlette we found that nearly all of these folks had not used a storyboard. They were so keen to find out how the modlette authoring system worked they just jumped straight in and made videos or slides without any planning.  The most efficient way to make a modlette is to plan it all before you start.  By doing this you can get all your material ready and into files ready to collect and assemble your modlette.

One of the most important stages of planning your modlette is creating a storyboard. A storyboard is a graphic representation of how your modlette will unfold, step by step.  It’s made up of a number of squares with illustrations or pictures representing each slide or step, with notes about what’s going on in the step and what’s being said in the script during that shot.  Think of it as a comic strip version of your script.

Why a Storyboard  is Essential

Creating a storyboard might just sound like an extra step in the process of making a modlette, but trust us, it’s a step you won’t want to ignore. Here are three compelling reasons why you need a storyboard:

A visual aid makes it much easier for you to share and explain your vision for your video or modlette with others.

When we have others collaborating with us to produce a modlette often they can’t see your vision. The core issue is that often these stakeholders don’t have the experience of visualising something off a text deliverable, such as a script.

When you have a storyboard, you can show people exactly how your modlette is going to be mapped out and what it will look like. This makes it much easier for your helpers to understand your ideas.

When you storyboard your ideas you’re setting up a plan for production, including all the images you’ll need for each step, the order that they’ll be used, and how the visuals will interact with the script.

The storyboard is a starting point around which you can plan your coverage of the subject you are addressing in your modlette. This is invaluable when you are assembling your modlette, as it ensures you wont forget any elements and helps you create your modlette to achieve your vision.

While it may take you a little time to put your storyboard together, in the long run it will save you time in revisions later. If you have a good storyboard and all your material assembled, it will make the creation process go more smoothly.

In next month’s “modletter” we will show you how to use the modlette storyboard template in the eBook “Make My Modlette Amazing”.